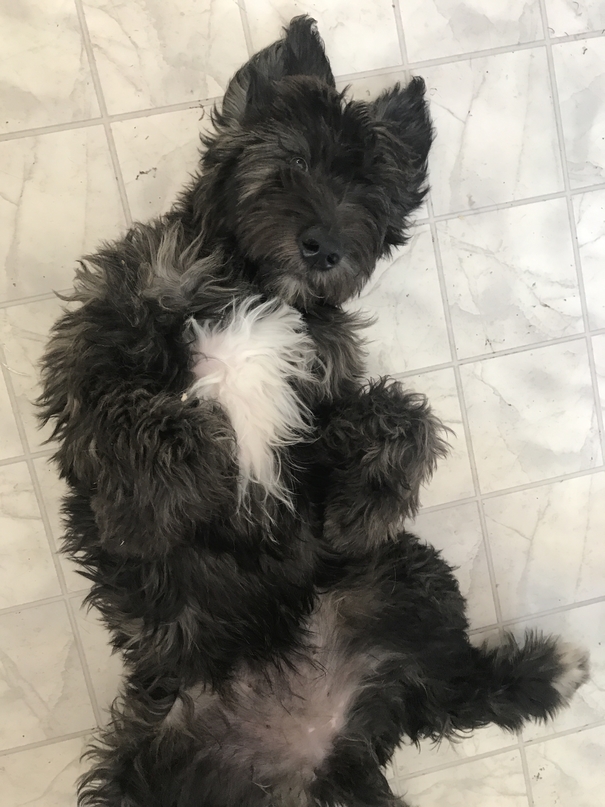 Thank goodness for this thing!

I decided recently that we would try to do a blog post a week just giving you all a little insight in to just how whacky, messy and hectic life gets around here. I know you all see my cute puppy picture posts, the pics of my dogs doing adorable things or napping or showing off a new trick. The truth is though,,,, soooo much more often it is barely organized chaos over here. I have this coffee mug that says “chaos coordinator” and I honestly think that is my perfect job title. Between the dogs, the kids, the occasional cat shenanigans I usually feel more like the ring master at a 3 ring circus than a polished working mom or business owner. My coworkers are all super needy, mostly food motivated clowns who do NOT take their job’s seriously at all.So, for this reason, I give you “ Monday Mayhem” admittedly.. these stories of mayhem managed, havoc wreaked and chaos coordinated do not always happen on Mondays. I just figure Monday is the day to post it because possibly my dog hair covered mess of a life can bring you all a laugh on your own Mondays.

This week’s Monday mayhem starts with Romeo. If you’ve been following along with us for awhile you may have seen the occasional photo of the old man. We have had Romeo now about 10 years, he will be 12 in April and came to us as a young adult. He has weaseled his way into our hearts here despite the fact that he is a huge pain in the arse. Romeo is that dog who has to be sedated at the groomer because he HATES her and her clippers with the fire of a thousand suns. He is that dog who wants to go for car rides and walks in public so badly but is so super reactive that it is embarrassing to be seen with him,. Mind you, he is significantly better now than he was when he came here but in the words of my vet he will “always be kind of a spook”.  All that said, Romeo is getting older so he prefers to spend the majority of his time in the house, away from all the four legged peasants who run around outside playing and being dogs etc. Prince Romeo prefers his throne on the couch in front of the tv.. or better yet, on Riley’s bed (she is his favorite person).

Last week Romeo and Riley were just chilling in the living room early in the morning. She was sitting on the floor with him feeling sorry for him because he had had an upset stomach and  I had just trimmed his hair. It was cold that morning so she threw a blanket over him while they sat on the floor together. I went upstairs with a load of laundry that needed to be put away and about 2 minutes later I hear RIley yelling “ROMEO… DUDE… WHAT THE $#%^!!!   NO NO NO!!!!). Obviously I run back downstairs and ask what he did.. He is a notorious counter surfer and trash can bandit.. but no.. as I get to the bottom of the stairs the smell of fresh dog poo hits me square in the nose. I come into the kitchen/living room area to find Riley looking totally horrified and heading for the bathroom, while Romeo is squatted at the edge of the kitchen just crapping away.

Riley then says “ He literally just SHIT ON ME!!” And he had, in fact, shit on her.. her sweatpants were covered in it.. it was trailed across my white carpet and onto the tile where he eventually finished the job.   So I.. as calmly as one can when faced with a poop explosion first thing in the morning.. usher the old man outside to finish any remaining poop needs he might have.. and grab the paper towels, Nature’s Miracle and my trusty carpet cleaner. Meanwhile.. Riley has made it to he bathroom to change her clothes but I can hear her vomiting because she is sooo incredibly disgusted by what just happened to her.

I just want you all to take a minute to appreciate the scene here.. teenager screaming at the old dog to stop what he is doing.. the smell of dog poo is THICK in the air.. horrified, poop covered teenage girl standing in the kitchen looking shocked, disgusted and a little vomity.. and an ancient, scrawny poodle with a bad hair cut covered in a plaid blanket just sprinkling dog poo like its glitter all over the carpet and kitchen floor.. Meanwhile, Clay, who is working from home walks upstairs to get a cup of coffee, says “what is going on?” I give the short explanation while gathering cleaning suppliers.. he says “Jesus #$&%ing Christ” and disappears back to his office.